Just over six and a half years ago, on September 27, 2013, in the city of Stockholm, Sweden, scientists presented the most comprehensive and authoritative report on the state of climate science to date. The fifth Intergovernmental Panel on Climate Change (IPCC) states, with a 95% margin of confidence, that human beings are the main cause of the current global warming that our planet is suffering.

It is an irreversible process, because the GHGs issued act for more than a century. However, current forecasts could be worse, if we do not reduce our large CO2 emissions to the atmosphere and we do not prepare ourselves in time for what is coming. The stupid human being, ‘homo stultus’, in which we have become, will be able to react this time, or will continue giving more importance to the economic and financial interests of a few in front of the Climate Change of all and thus, continue with hardly Do nothing? 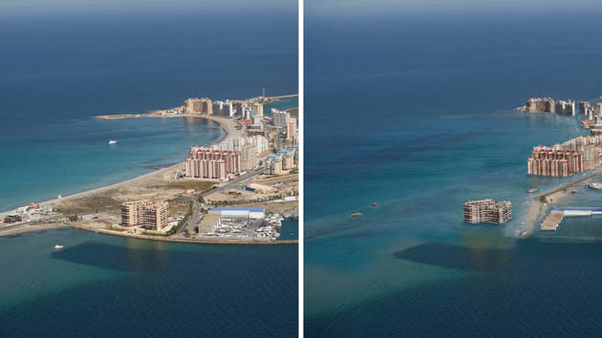 The warming of the climate system is already an unequivocal fact, and since the 1950s, many of the changes observed in recent decades are unprecedented in millennia. The findings on climate change are already incontestable due to the weight of data that is already overwhelming and overwhelming: the atmosphere and the oceans have warmed up, both the surfaces and the volumes of snow and ice have decreased, the level of sea ​​has increased and greenhouse gas concentrations have also increased.

Since 1850, on the surface of the Earth, each of the last three decades has been, successively, warmer than any previous decade. In the Northern Hemisphere, the period between 1983 and 2012 was probably the warmest period of the last 1,400 years.

The warming of the ocean reflects the increase in energy stored in the climate system, which represents that more than 90% of the energy accumulated, between 1971 and 2010, in the most superficial layers of the oceans (0-700 m).

In the last two decades, the ice sheets of Greenland and Antarctica have been losing ice mass constantly every year. Glaciers have continued to decline in almost the entire world, and both sea ice in the Arctic Ocean and spring snow in the northern hemisphere have continued to decrease in extent.

Since the mid-nineteenth century, the rate of sea level rise has been higher than the average rate recorded during the previous two millennia. During the period 1901-2010, the overall mean sea level has increased by 20 cm.

The atmospheric concentrations of carbon dioxide, (CO2), methane, (CH4), and nitrous oxide, (NO2), have increased to reach unprecedented levels in the last 800,000 years. CO2 concentrations have increased by 40% since pre-industrial times. These are concentrations mainly due to emissions from the burning and handling of fossil fuels and, secondly, due to the net emissions of CO2 caused by the change in land use (deforestation). The oceans have absorbed about 30% of the carbon dioxide emitted from anthropogenic origin or caused by human activities, thus causing the acidification of the ocean

Therefore, the human influence on our climate system is quite clear. It is something that is already evident and irrefutable because of the weight of the data that confirms the increase in greenhouse gas concentrations in the atmosphere, the positive radiative forcing, the progressive warming observed and a greater understanding and knowledge about how it works. the Earth’s own climate system.

Therefore, the scientific evidence confirms that climate change of human origin is a reality and that, without the adoption of urgent measures worldwide, the impacts on Earth’s climate will worsen. The ‘homo stultus’ must be defeated by the ‘homo sapiens’ if we want to get out of the calamitous challenges we face.

To tell the truth, Climate Change is an unstoppable process due to the stupidity, blindness and greed of human beings. We can only act so that things do not get worse (Abrupt Climate Change) and so that those countries or regions that are most affected by the impacts of Climate Change do not suffer tragic impacts that represent great human and economic losses.

The time for the debate is over. It is time to act and tell the financial sector that controls the world that everything is not worth it, that it is necessary to penalize CO2 emissions to the atmosphere, that Climate Change is not listed on the stock market and that it must start doing so so that it does not there is still impunity for those who cause great damage to the climate.

The increase in temperatures will undoubtedly bring an enormous economic and human cost that, above all, must be paid by future generations. If we do not modify our actions and stop putting the accumulation of power and money over sustainability, in future history, the current generations will be remembered as decadent, composed of stupid and weak beings at the service of greedy financial interests and gamblers.

We have to support the countries and communities with the greatest risk in the necessary preparation to be carried out to deal with disasters, to reduce the impacts of extreme weather events and, in turn, to create a rapid and effective system of aid to those communities in order that they can recover more quickly when disasters occur and begin to suffer them.

The consequences of what represents the melting of polar ice caps and rising sea levels will be enormous, traumatic and irreversible, both for people and for economies around the world. Above all, for those populations that depend more on the land and the sea to obtain their livelihood, since they will be, by far, the most affected. Similarly, in those communities (countries, regions or populations) where climate change is more extreme and pronounced, the negative impacts will be more traumatic and rigorous.

This entry was posted on martes, 9 de marzo de 2021 at 2:26 pm and is filed under Cambio Climático, Uncategorized. You can follow any responses to this entry through the RSS 2.0 feed. You can leave a response, or trackback from your own site.