What is the relation between mass and inertia?

The concepts of mass, inertia and the relationship between mass and inertia are fundamental concepts in the field of physics. Understanding how mass affects inertia also allows us to easily understand and predict the movement of other objects. Some scientists use the concept of inertia to establish hypotheses about the mass of distant objects on Earth such as stars and planets. 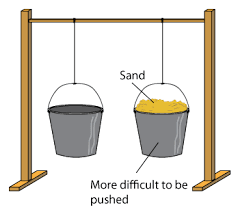 The mass is related to the matter of physical substance. The mass measures the amount of matter in an object. Scientists generally measure mass by weight, rather than by the volume of an object because density must be taken into account. Indeed, an object that looks very large like a hot air balloon may not be very dense and, therefore, may have less matter than an object that is physically smaller.

The tendency of a physical object to resist changes in movement is called inertia. This tendency is reflected in the expression: “Every body will remain at rest or with a uniform rectilinear movement unless a force acts on it” or “a body at rest tends to remain at rest, while a body in motion tends to stay in movement”. Like it is obvious, this tendency does not mean that something that is in motion can never stop. Simply, it means that if no force interferes with that movement, the object will remain in motion. The Law of Inertia is Newton’s first law.

The relationship between mass and inertia

The relationship between mass and inertia is often demonstrated through simple magic tricks. When a magician pulls out a light tablecloth that has heavier objects placed on top of the tablecloth, if the trick is done correctly, the objects will not move from above the table and the tablecloth will have been removed. Likewise, we will verify that what Superman does when slam on the brakes his flight in the air or turning his flight in an angle of 90 degrees is impossible due to the inertia.

The inertia of the objects of the table is not affected by the fact of pulling the light tablecloth and removing it from the table and, consequently, said objects remain without moving on the table. Students can also witness examples of inertia, by rolling light balls and heavy balls that are used in the bowling alley and measuring the distance each wheel balls until they stop. We will easily check that the heavier ball will go farther. Or, when we try to swing two cubes. One loaded with sand and another empty.

They are an example of mass affecting inertia.

This entry was posted on 20 septiembre 2020 at 5:00 pm and is filed under Uncategorized. You can follow any responses to this entry through the RSS 2.0 feed. You can leave a response, or trackback from your own site.