Climate Change has not been growing as fast as we could think. We have been almost two centuries since the beginning of the First Industrial Revolution, attacking with our CO2 emissions the climatic balance of planet Earth.

Since the beginning of the 21st century, we began to suffer imbalances in the climate that broke with previous patterns and each year that passed became the warmest year, progressively increasing the levels of global warming, as well as the melting of glaciers and ice in the Arctic and Antarctic regions.

This global warming has accelerated also affecting the oceans and we have entered a phase of increasing climatic instability that, as with the unstable balance of an spinning top, the dynamics initiated will bring the climate closer to another stable climate pattern characterized by a new glaciation as this has happened repeatedly over the course of the climatic evolution of our planet.

According to the website of the company Factor CO2: CO2 levels reached in March 2019 are the highest in 3 million years

The last time carbon dioxide levels were so high, Greenland was mostly green, sea levels were up to 20 meters higher and trees were growing in Antarctica, according to scientists who warned this week that there is more CO2 in our atmosphere today than in the last three million years.

Using a new computer simulation, researchers at the Potsdam Institute for Climate Impact Research (PIK) in Germany found that the last time the Earth’s atmosphere had a CO2 concentration as high as today was during the Pliocene, the geological period between 2.6 and 5.3 million years ago.

CO2 emissions from human activities are the main cause of climate change.

The amount of CO2 in the atmosphere today is «unnatural», the lead author of the research, Matteo Willeit, told CNN.

Willeit said that according to the simulation, CO2 levels should not be higher than 280 parts per million (ppm) without human activity, but they are currently 410 ppm and are increasing.

Average global temperatures are rising much faster than at any time since the Pliocene, Willeit added.

At that time, they have never exceeded pre-industrial levels by more than 2 degrees centigrade, but current models show that temperatures will rise by 4 degrees centigrade between 2000 and 2100 if measures are not taken to reduce emissions, he said.

We are entering unknown territory where increasing levels of CO2 are pushing the Earth beyond the climatic conditions experienced by humans.

If CO2 levels and temperatures continue to rise, «our planet will change» and sea levels will increase by one or two meters in the next 200 years, he added.

This research is not the first to suggest that current levels of CO2 are the highest since the Pliocene, but Potsdam researchers say that their work is the first to combine the ocean bottom sediment data with the analysis of volumes of ice past, and it is more sophisticated than other model studies.

At a meeting of the Royal Meteorological Society on the climate of the Pliocene in London, scientists discussed how sedimentary records and fossils of plants near Antarctica show that during the Pliocene era, summer temperatures in the Arctic were 14 degrees Celsius higher than the current ones.

Professor Martin Siegert of Imperial College, London, speaking at that day’s event, said the findings offered a glimpse into the future of the Earth, in the event that drastic measures were not taken to address global warming as effective. A very unlikely assumption if we consider how easy it is to manipulate people from the media and social networks in the service of the denials of climate change.

Especially if they hide answers like this to so many possible readers who, although they do not worry about building a better future for the world, nevertheless they have a vote and it is not fair that they vote on what they ignore, when in Quora they could know a truth that It concerns them so much. 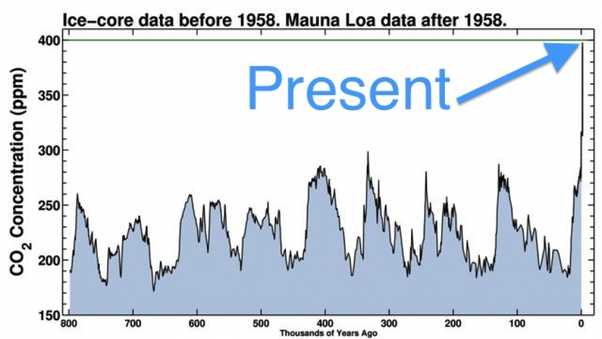 This entry was posted on jueves, 11 de julio de 2019 at 9:31 am and is filed under Uncategorized. You can follow any responses to this entry through the RSS 2.0 feed. You can leave a response, or trackback from your own site.