The Big Brother’s Algorithm by Jonathan Gabinah (Author) in Amazon

The novel «The Big Brother’s Algorithm» is a political thriller that is developed mainly in the year 2023, mainly in the United States, and includes some well-known developments derived from the beginning of the last financial crisis in 2008, and the economic depression of the previous decades. At the end of this period the progressive deployment of technologies of the 4th industrial revolution takes place. These impressive technological advances provoke a paradigm shift that affects employment, knowledge, the human-machine interface, ways of life and all economic sectors. This requires a change in the economic model that replaces the current, obsolete and traumatic economic and financial model. 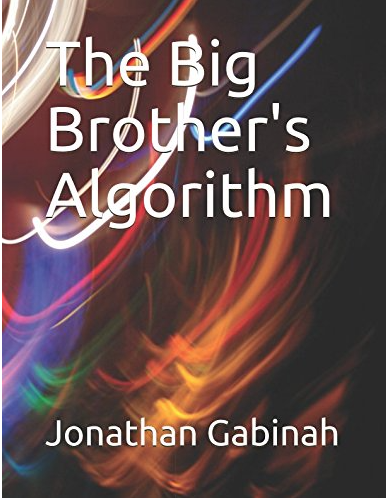 We need to promote a sustainable development model based on digitalization (Blockchain) and robot systems, artificial intelligence, etc. For this, it will be necessary to introduce many disruptive innovations in the system to allow a non-traumatic transition to the new emerging scenario, improving even the social achievements and the welfare state, based on sustainability. However, the rentiers of the system who are the losers of the system, are those who most oppose the disruptive changes to introduce. In general, advances in psycho-socioeconomic analysis, quantum supercomputers, robotics and algorithmic sciences and Big Data technologies have shown that human nature is incapable of understanding, managing and controlling complex systems. At the same time, it is emphasized that human beings are increasingly easy to manipulate, since the human masses conform their opinions opinions based on feelings, hormones, in a context based on false stereotypes, where critical thinking is annulled, the truthful information and diminish the adequate levels of intelligence and culture. The psycho-technical control of feelings and the formation of criteria are used for the manipulation of elections, which calls into question the validity of democracy where the human mass always wins and is easily manipulated thanks to new technologies. Under these conditions, the slogan «one man, one vote» becomes «one dollar, one vote». The novel «The Big Brother’s Algorithm» can not be considered a science fiction novel because all the technological advances described exist or are in different stages of development. This is an anticipated vision of what we can assume, if we do not react in time, it is very likely to happen. It is like a warning that comes in advance to give us time to create solutions that anticipate events and avoid situations of traumatic adjustment. Although the future is almost impossible to predict; however, it is much easier to prepare.

This entry was posted on jueves, 28 de junio de 2018 at 2:20 pm and is filed under Uncategorized. You can follow any responses to this entry through the RSS 2.0 feed. You can leave a response, or trackback from your own site.